Ski Mountaineering, the sport that caresses the mountain

Home / Blog / Ski Mountaineering, the sport that caresses the mountain

Winter is around the corner: if you are reading this article, and ski mountaineering and freeride weekends are what dominates your daydreams; if, before you fall asleep in the evening, you find yourself scrolling for tips and advice on your mobile phone looking for the trip of your dreams and in the morning have breakfast by counting the difference in height between the top and bottom of the valley, you have landed in the right place! 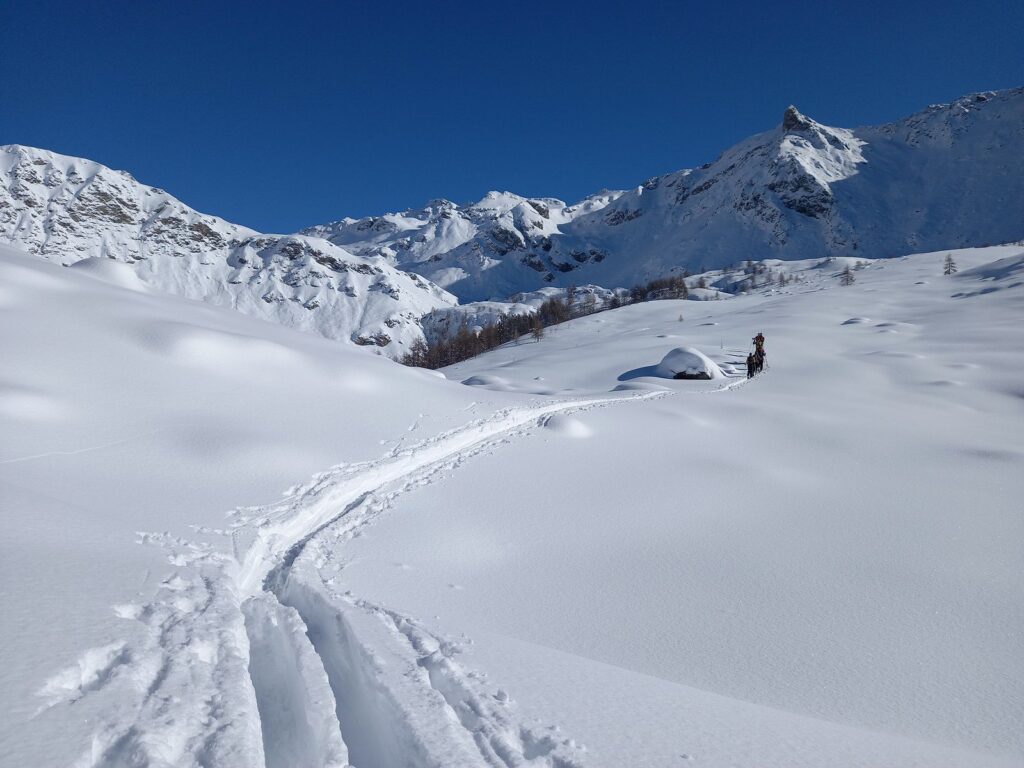 The three valleys of Monte Rosa (Valsesia with Alagna, Valle del Lys with Gressoney and Val d’Ayas with Champoluc) will be your next destination for at least 5 reasons:

Which routes are the most popular for ski mountaineering?

The tour of Zermatt: the circumnavigation around Monte Rosa which in 4 days touches Alagna, Zermatt, Champoluc and Gressoney
Pyramid Vincent: the trip with the most spectacular view of the eastern side of Monte Rosa and a descent with the sun in your face!
Val d’Otro: if avoiding clichés is your philosophy of life, ski mountaineering in the magical Otro valley is an experience you will not expect.
Capanna Margherita: the most popular ascent for mountain enthusiasts; in a winter setting it is simply magnificent
Castore: a descent on perfect slopes with all the 4000mt peaks of the Alps in sight.

But which trips do the guides of Monte Rosa dream of?

We have a gift for you: the following are interviews we had with some of the guides, where we asked them what their favorite excursion was, the one they have been dreaming of since the beginning of autumn, the one they have eagerly been waiting for the perfect conditions for!

Andrea Tamilla of Alagna told us that his all-time dream descent is the Passo della Coppa. Why? Because it has all the elements that a perfect ski trip must have for him: a frozen lake, wide slopes where you can indulge in inversions and technique, a magnificent view of the Val d'Otro, which according to Andrea is the most beautiful in Alagna, and a breathtaking descent with a wild ending! Andrea says it is the perfect trip for those who like him, is first and foremost a ski mountaineer, but he appreciates the lengthy descents which, with an acceptable difference in height, can be reached from the ski lifts in the area.

Ioris Turini of Gressoney has ambitious dreams: he aims for the saddle between the two Lyskamm peaks and then continues towards the crest of the Naso peak up to the source of the river Lys. Ioris knows that climbing the Lyskamm ridge on skis will not be easy, but when his skis point downwards, he is absolutely certain his adventure will be unique. He dreams of this descent because it is a harmonious mix of solitude and adventure, preparation, and intuition. You have to be very experienced to chase Ioris' dreams. Click here to contact him to find out more.

Ioris' heart also beats for another more magically wild descent: the Crooked Man Pass. The reason? Because this is ski mountaineering in its purest form: sunny slopes, varied terrain, steep canals, which alternate with sinuous valleys and the hiking trail of Gender, a path full of poetry which evokes tales of life and adventure.

Andrea Degasparis of Alagna has no doubts: Otro! From the Coppa or canals of Granus. His dream trip is: "a wild journey in my territory ... this was where I was born and where my family has lived for generations ... ibex, chamois and partridges in the distance ... the fairytale plain of Gender ... and arriving in Alagna from a different point of view, without wheels, legwork only; a long journey immersed in nature ".

What can we say? Val d’Otro is in the heart of the guides of Monte Rosa!

Alberto Zucchetti, however has a different opinion. For him, the trip of his dreams is from the Lys pass with a descent onto the Grenz glacier. His goal: The wild environment of the high mountains and the very long descent, surrounded by the most beautiful peaks of the Vallese.

Teodoro Bizzocchi has the same objective as Alberto. For him, the Grenz glacier is a fairy-tale environment where man is not needed. When Teo thinks of this descent, he only has three adjectives in mind: grandiose, surreal and ephemeral.

If ski mountaineering is your philosophy of life, Monte Rosa is without a doubt the destination for you.

Did you know that some of the most coveted alpine skiing competitions take place on Monte Rosa?

The Mezzalama Trophy: is the highest ski mountaineering competition in the Alps and surpasses the peak of Castore (m 4226) and the Naso dei Lyskamm pass (m 4150).

The MonterosaSkiAlp: is a night ski mountaineering competition that takes place between the Ayas and Gressoney valleys on the slopes of the Monterosa Ski area