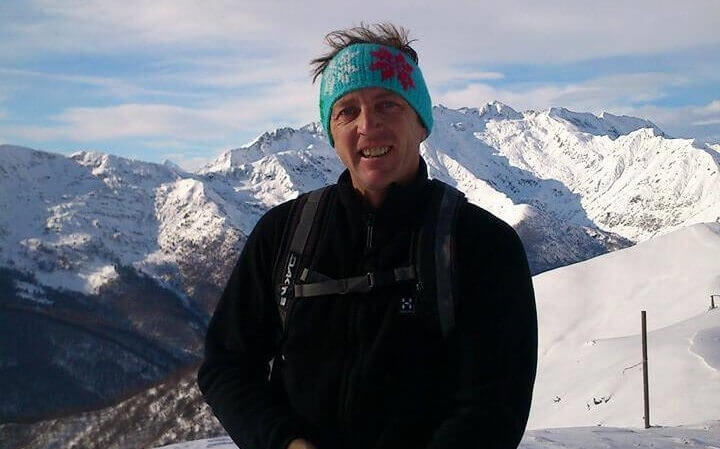 I am Fabrizio Uberti “Bicio” to everybody. I was born in 1969 in Varallo, but my childhood was spent in Trentino, far from Valsesia where I returned again at the age of 12. When I was little, my father took me close to the Mountain, but She was already inside of me probably. With time while growing up, I made it my duty to get to know Her and savour Her in all her splendour and in every aspect. I started skiing as a teenager with my friends…then developed the passion for rock climbing and alpinism, the classic style at high altitudes and the first important ascents in the Bianco group, on Rosa and in the Dolomites. At a certain point, I wanted a look from above and I did so, first in a hang glider and then in a parachute. The mountain in winter becomes an irresistible attraction for me as my passion for rock climbing increases on the ice falls; Rosa lends the unforgettable scenery for cross country skiing; ski touring, silent valleys and off-piste skiing… and much much more. In 1993 I became an Alpine guide. I would like to envelop my passion around anyone who approaches the mountain.

In 1997 I passed my exams and became an Alpine guide Instructor. For the same reason, after many years as a technician on the Alpine Rescue team, I became the Regional Instructor of the Heli-Rescue in 1999. I am enthusiastic about everything regarding the mountain: the air, the silence, the fatigue, the emotions and I try to get the person with me on an excursion involved in my passion. This is always a new experience, as our trip most likely ends in a welcoming bar with a good snack.