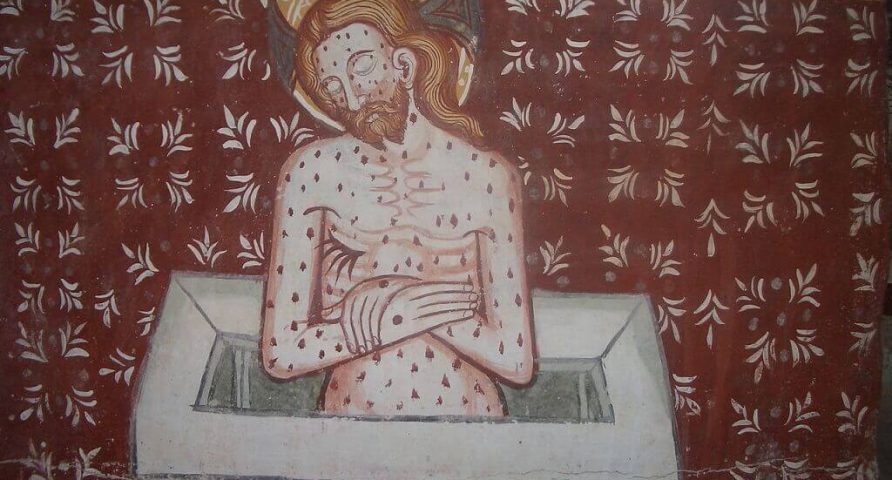 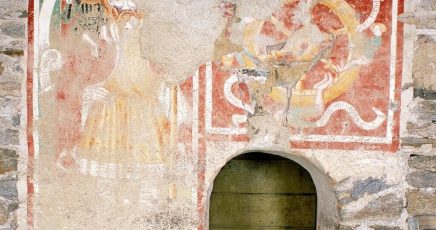 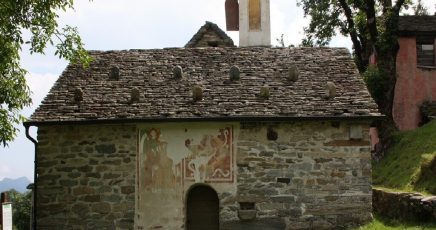 With children: no
Where to eat: Rifugio la Baita – Alpe Seccio
Route number: n. 387 – follow Sentiero dell’arte
By bike: no

In Boccioleto, Val Sermenza, 33 km from Alagna, there is a path that leads through the history. First you reach the hamlet Ronchi at 814m asl, where the route starts. The Church of the Madonna delle Grazie, a true jewel of art, first mentioned in 1617, contains a canvas painting of the Madonna on the throne of Rocca dated 1635, an altarpiece of Dedominici and 19th century Avondo frescoes on the facade.
The trail continues towards the chapel of Genestroso. Shortly before Ormezzano some crosses remind us of the victims of an avalanche. When you reach the small hamlet (20 minutes) stop at the oratory of St. John the Baptist where you can admire an altarpiece dated 1649 and the fresco on the facade is the work of Avondo. In 15 minutes you will reach Solivo at 1027m asl, situated in a beautiful panoramic position and the last inhabited area in the Cavaione valley. The oratory dated the end of the 1600’ , is dedicated to St. Anthony of Padua. The front has a contemporary chapel of St. Nicholas of Bari, preceded by a portico with columns and lunettes depicting the Annunciation, inside a sweet Madonna with Child Enthroned and elegant draping as a backdrop, beside them St. Peter and St. Nicholas, San Defendente and a Crucifixion on the walls and a beautiful Annunciation on the ceiling entrance.

The 30min trail which becomes more steep and strenuous between large beech trees leads to the chapel of Selletto 1185m asl.  It is a chapel for rest with a portico with elegant columns. Across the plains you reach the Daloch , Saas and Rivetti alps and then reach  alpe Seccio 1388m asl in 30 minutes where you can admire the oratory of San Lorenzo, the jewel of the Sermenza valley. The church was built in the second half of ‘300 and consecrated in 1446, the year which dates the beautiful interior frescoes, almost all well preserved . On the ceiling of the apse a magnificent Redeemer, the Four Evangelists and the Annunciation is painted; on the entrance wall, splendid figures of martyrs and church fathers. Outside the square are the remains of an ancient fresco dedicated to St. Christopher and a rare painting of the wheel of fortune. On the way back, we pass by Alpe Tetto, characteristic for the old “torbe” and houses built with massive spruce logs. Returning to Boccioleto we recommend a detour to the hamlet of ORO (25 minutes) to visit the church of St. Pantaleon, 1477, and that of the Madonna del Carmine which has Orgiazzi frescoes of the 18th  century and Borsetti frescoes. The first is at the center of the houses and is completely covered in frescoes. Worth mentioning is that at Boccioleto is the 16th centuryOratory of House Milanetto on the old trail (trail no.387) which leads to Ronchi. At the beginning of the village towards the east, stands the chapel of the Madonna Di Loreto, known as “Gesietto”. It is known for its rather ‘strange’ aspect and for the variety of marble and the paintings are by Cavallazzi Oleggio (1538). Finishing this worthy artistic itinerary is a visit to the parish church with frescoes by Borsetti (ceiling and paintings of the Apostles), Orgiazzi (St. Peter and Paul), Avondo (presbytery) and Dedominici Rossa (Santa Filomena). In the Church of the Annunciation, now a museum are many works of art from allthe remotest oratories and chapels found in the valley. From these we make mention of the “Lamentation over the Dead Christ”, an imposing 16th century wooden statuary group, from the Sanctuary of the Madonna del Sasso.