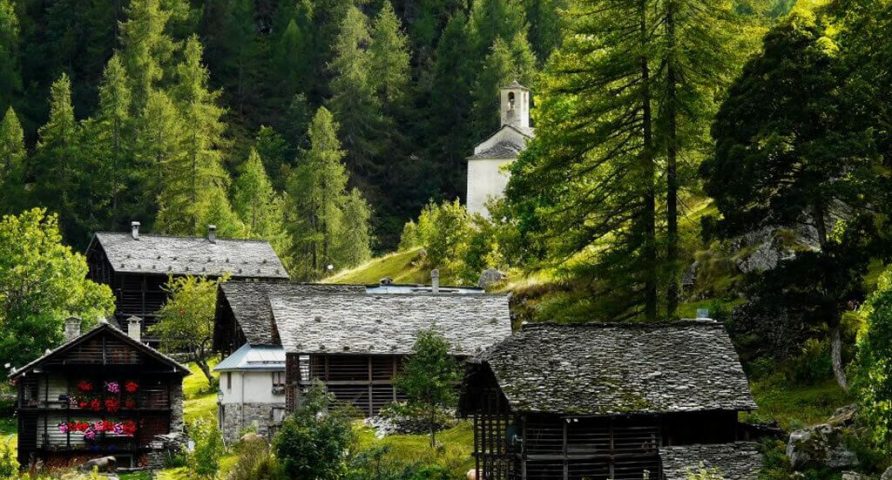 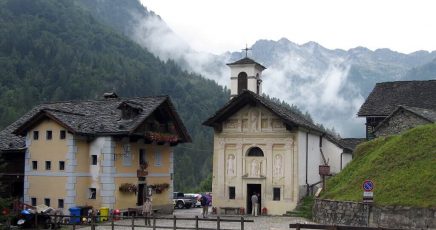 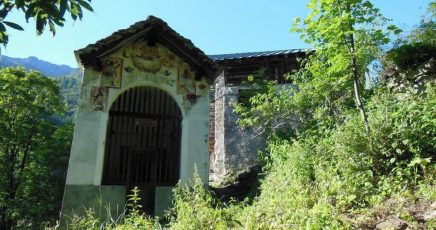 An easy walk between the villages and the nature of the val Vogna. Well-marked trails, mostly flat

You enter the Vogna valley from Riva Valdobbia. It’s a beautiful valley full of contrasts: wild and rugged in some places, but the many Walser villages make it cultivated and fascinating . After many winding road turns and passing the little chapel of The Madonna of rest (where the villagers stopped to rest with their loads on their shoulders) on the right, we arrive at Cà di Janzo. Here the road is closed during the summer months and a transit permit is only issued to residents. The village was once famous as a summer residence and the hotel “Pensione Alpina” today Casa Alpina Regina Margherita, hosted the Queen Margherita of Savoy in 1898 and Sibilla Aleramo in the early 900’s.

From Ca di Janzo, following trail n° 210, you will reach Selveglio a beautiful village perched on the slopes of the mountain in 30 minutes. Along the trail, the seventeenth-century chapel of St. Anthony is well worth the visit. Selveglio welcomes visitors who can visit the beautiful chapel of the Madonna del Carmine with a bell from the end of the 1700’ and the monumental farm houses constructed with walls in interlocking larch timber and big porches. A fountain made of larch is still in use. The church of San Defendente built by the villagers who escaped the plague of 1630 has three sundials dating early 1800s, the work of G. Carestia. Leaving the trail (no.210) that leads to Cima Mutta, continue left along a well marked scenic trail and you will reach the village of ORO in 10 minutes. Here you should pay special attention to the beautiful houses built on “mushrooms”, which are wooden columns that support the main body of the house to prevent mice from entering.

More beautiful is the fountain, while the oven is in ruins. The chapel is dedicated to St. Lawrence. Halfway up, after a 10 minute hike you’ll arrive at Ca’ Vescovo where some houses have a white stone on the roof  to which magical powers were attributed. The village overlooks the village St. Anthony and has a magnificent view over the valley.

On the plains among the birches, the trail continues to Rabernardo, a hamlet  perched on a steep slope, past the porch of the chapel of The Madonna of the Snow with the original eighteenth-century bell tower. Of particular interest is the stone font inside the church , the sundial and the polychrome altar dated1600. One of the houses has been set up as a Walser House Museum and well worth the visit . Avoiding the trail to Sant’Antonio, you hike up towards the meadows above the hamlet to reach Selletto first and then Cambiaveto. Large meadows and forests of ash trees surround the houses in a landscape of pure poetic beauty .

The trail continues towards the houses of Piane, a hamlet divided into two distinct groups. The 16th century stone avalanche break for the protection of the houses is of particular interest . In 15 minutes you’ll reach the hamlet Peccia, the last in the valley. It is an ancient village that was devastated by avalanches several times. After the unadorned chapel of St. Nicholas the trail passes between the houses, passed a fountain and leads to the church of Saint Gratus . From here, you may want to return passing the “low-lying” hamlets , starting with Sant’Antonio with its beautiful square which faces the oratory and the building of the former elementary school which has now become one of the stops of the G.T.A , then Ca’ Verno, Ca’ Morca and Ca’ Piacenza, to reach Ca’di Janzo again, the starting point of the route.