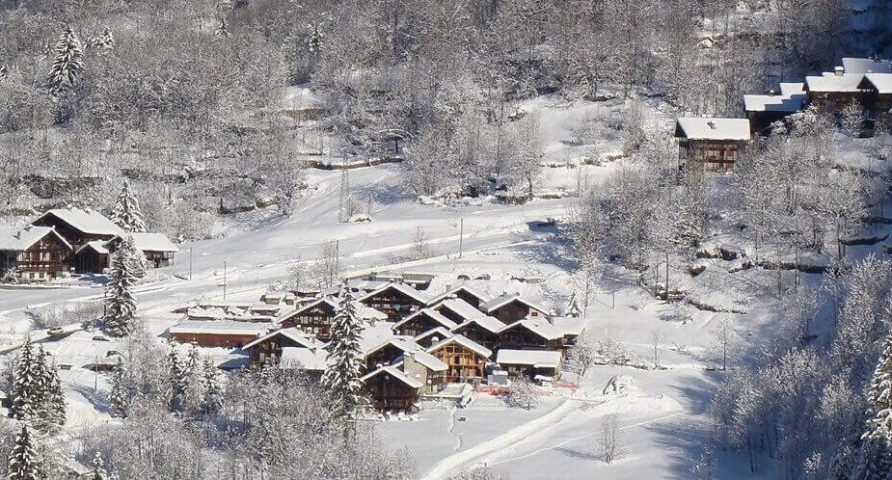 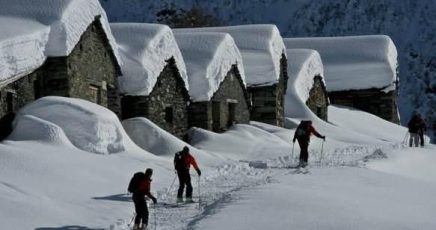 With children: yes
Where to eat: Montagna di Luce
Route number: no
By bike: yes

Tour of the antique hamlets, where you can visit the first settlements of the Walser colony of Alagna

From the Church of Alagna follow the road to Pedemonte, passing the Zam T’achi bridge. You meet frist the hamlet Ponte (30 min), than Pedemonte. From Pedemonte go to Ronco (15 min) and Ronco Superiore (15 min). Downhill to San Nicolao and Uterio to reach than  Merletti (30 min) following the path in Wold direction. Back to Alagna centre along the road connecting Alagna with the Natural Park (30 min)

The Antique hamlets of Alagna: Ponte, Pedemonte, Ronco, San Nicolao Uterio and Merletti. Between the end of the XIII and the beginning of the XVI centuries, small groups from Macugnaga arrived in this territory, which at the time was not permanently inhabited, from across the colle Turlo. They settled on monastery territory at the foot of Alpe Mud, renting the vertical strip that stretched from the top to the foot of the mountain.
Until then the territory had been used as mid-season pastures by the inhabitants of Pietre Gemelle, and afterwards became little villages. The first was named Pè de Mud (Pedemonte) and the oldest written testimony dates back to 1302.

From the church square in the heart of Alagna, follow the road in the direction of Piazza degli Alberghi, where two historical hotels of the good era: the Monterosa and the Cristallo, known as Hotel Ferraris before, face each other. A little further, there is a bridge (not fit for traffic) on the right, that crosses the Sesia and leads onto the meadows Zam T’achi where the trail starts. It then runs alongside the left banks of the Sesia and leads to the oldest fraction in Alagna.
First you encounter the hamlet Ponte which was destroyed by a fire in 1819 and then rebuilt with stonewalls rather than wood. Only the lodges have maintained the typical local architecture. The antique oven that survived the fire and still perfectly preserved today, is the symbol of the original village. Following the trail through fields and meadows you will reach the hamlet Pedemonte, an intact Walser village where the Walser museum and the Daverio foundation are situated. The latter is a charity association that concerns itself with the preservation of the Walser culture and educating the new generations how to preserve the heritage of their origins. In the centre of the village, in the enchanting little square faced by perfectly preserved Walser homes, is the splendid village fountain made up of two monolithic baths dating 1540 and 1557.

Crossing the narrow streets shaded by the closeness of the roofs of the houses, the trail leads to the oratory of Saint Nicolao, with its elegantly painted facade, work of the Avondo brothers in the 19th century. The construction of the actual building dates back to the second half of the 17th century. The saint is particularly honored in the village and on 6th December the day is celebrated with Holy mass followed by auctioning offerings and the children handing out apples.
Following the road in front of the oratory, you will reach the start of the trail that leads to the houses of the hamlet Ronco, in five minutes. It is a beautiful hamlet that leans on the sides of the mountain and is well exposed to the sun. The narrow streets, intact houses and panoramic position, makes this hamlet one of the most captivating, built around a minuscule square dominated by a monolithic fountain dated 1581.
A little further is the hamlet Ronco, the proud holder of some of the most ancient houses in Alagna. In Ronco Superiore there is also a well preserved Stodal-bai, a farm building built on two floors with gaps in between. Such buildings where living space, stables and haylofts are generally all together in one structure are quite rare in Alagna. On the return trip from Ronco, it is possible to cross the torrent Mud on a small ford immediately to the right of the intersection of the hamlet road with the main road. After Mud you enter the hamlet territory of San Nicolao and Uterio where two important stops of the ecomuseum meet: the hamlet oven and mills. The oven was an essential component of the self-sufficient economy of the Walser. It was the property of the families who lived in the hamlet, and was used twice a year and everybody contributed in the various phases of the work. It is made up of two pieces united by a perimetrical wall: the back part is for the fire and the front part, on specifically made stone shelves, are the plates on which the dough is put. Not far from here is the fourth stop of the ecomuseum: the mill of Uterio. These mills, dated 1552 and 1694, work with the help of an old stream diversion of the Sesia, and was used to grind locally cultivated wheat, rye and barley. It consists of two mills with horizontally positioned cup-shaped wheels, like the Vitruvian type. Inside the mill,a funnel the shape of a pyramid contained the grain that was channeled by a feeder into the millstone where the grinding process worked by friction.
In Alagna there were 27 mills. From the mill of Uterio following the stream diversion you return to the hamlet trail, which starts from Saint Nicolao and leads to the hamlet Merletti Inferiore.
Here there is a well-preserved Stodal-bai dated 1646. Above the hamlet, you will reach the antique ovens used for the production of lime (5th stop of the ecomuseum), in 10 minutes. The Forno (oven) used in 1922 for the last time, for the construction of villa Grober in the centre of Alagna, using the limestone material found near the rio Fornace. The large quantity of wood in the area guaranteed the lime production for the local economy.
On the way back passing by Merletti Superiore, the little church of Santa Maria Maddalena (1691) merits your attention. It has one of the oldest chapels dedicated to Sant’Anna and still contains well preserved XV century frescoes