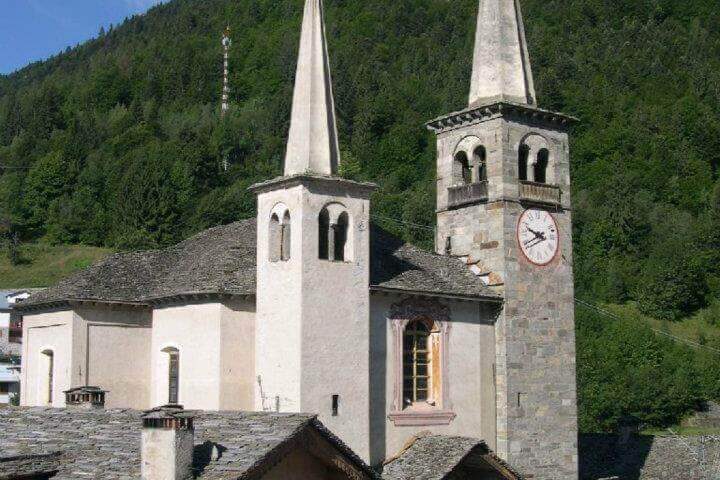 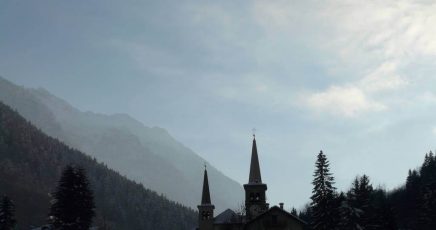 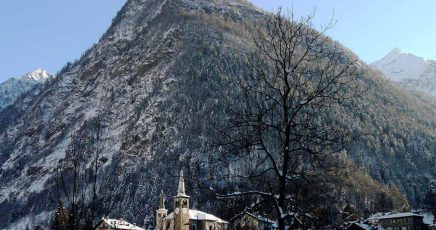 With children: yes
Where to eat: Bar Mario
Route number: no
By bike: no

In 1326 Riva Valdobbia obtained parish independence by separating from Scopa on which it was dependent until then. The present-day church was originally the cemetery chapel dedicated to Saint Mary, built in 1473. There are two striking bell towers and magnificent, grandiose frescoes on the front depicting the Last Judgement and Saint Christopher, work of Melchiorre d’Henricis of Alagna (Tanzio of Varallo’s brother), who completed it in 1597. The antique parish is found near the torrent Vogna and was destroyed by a flood in 1640. The inhabitants of Riva then decided to move the church to a more protected area and also to change the cemetery chapel into a parish church.
The representation of the Last Judgement was to reprimand the believers and was a fairly common painting on the back of the same wall.(inside the church). But in Riva Valdobbia it is found on the front. An explanation could be in the fact that Melchiorre painted that fresco for the cemetery chapel, so it is possible that the purpose was to scare the believers who went to visit the dead.
The Archangel Saint Michael is depicted in the centre of the fresco, in the act of weighing the souls during the Last Judgement and the giant Saint Christopher, patron saint of Valsesia and protector of the borders and areas of passage, is to the left. The choice of this particular scene is linked to a specific reason: the ancient road Via Regia which passed by Riva Valdobbia was connected to the Gressoney valley and then to France. This was the route that many Valsesians took in search of work abroad and while passing in front of Saint Christopher, they asked for his protection.
The entrance to the church is an acute lancet stone arch. The inside is richly decorated and adorned with paintings and sculptures like: the baptismal font that is made up of two parts, the upper part in wood and the base in soapstone (maybe dating back to the XI-XII centuries); the Assumption of the Virgin Mary, fresco paintings on the dome by Carlo Borsetti; the bass-relief in stone representing the Crucifixion of Christ by the master tombstone carver HW; the antique 15th century statue of the sacred Madonna with child and much more makes the church of Saint Michael an important place to see sacred Valsesian art.