The first documents related to the territory of Alagna and Riva dates back to the year one thousand. The territory under Mont Rosa belonged to the monasteries of San Nazzaro of Biandrate, San Pietro in Castelletto and to the Bishop of Novara and it is in the midst of their stories that you can read about the history of Alta Valsesia.

In the first documents the names of three mountain pastures appear : Alagna, Otro and Mud. These properties at high altitudes included a piece of land that leads from the lower valley to higher pastures. The name of the pasture referred to the property, but the lower valley which was used as a mid-season stop-over for herds on their way to pasture, was called Pè, origins of Pedemont or Pè de Myot (Mud) and Pedelegno ( Pè d’Alagna).
L’Alpe Mud appears in the diploma of Costanza in 1025 in which Corrado il Salico donates it to the Bishop of Novara. It reappears again in 1138 in the passage of property to the Cluniancese Monastery of San Pietro in Castelletto. A document dated 1196, certifies that the Abbot of San Nazzero entrusted Alpe Alania to the men in Roccapietra, renting it for 50 imperial coins per year and the day’s milking on San Quirico (13/7). 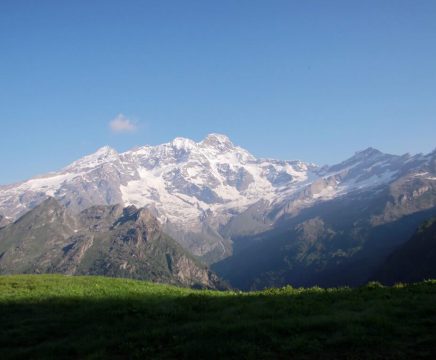 Mention of Otro can be found for the first time on a document dating back to 1025 and on one of 1083, where it states that it was donated by Guido of Biandrate to the abbey of Cluny, who transferred the property to San Pietro in Castelletto in 1138. Many areas of Valle Vogna on the other hand, were the property of the Bishop of Novara and still today, the hamlet Ca Vescovo is testimony to the memory of its ancient owners.
The Novarese Diocese also owned Alpe Alzarella and Pè d’Alzarella  whose traces can be found in documents dated 1300 and 1302. The hamlet Peccia though, belonged to San Nazzaro, as shown in payment concession deeds of the Walser from Gressoney.
It was the work of monasteries and in particular the Cluniancese monks who stimulated the colonization of the Walser between the end of 1200 and the beginning of 1300, by initiating the transfer of mountain pastures.

The importance of these mountain pastures was confirmed by the passage through the valley via the higher roads south of Mont Rosa, and in passing by the alps Bors and Safeyaz, uniting the valleys of Gressoney and Macugnaga. The latter is mentioned in the treaty of Brusson between Ebalo of Challant and the Valsesiano in 1270. 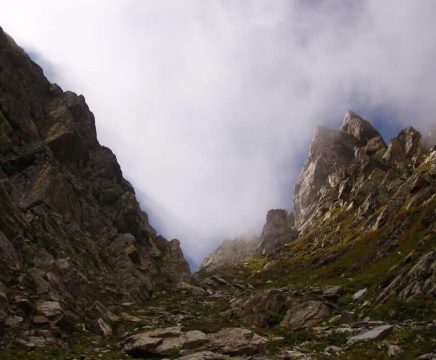 Ai piedi di questi alpeggi di proprietà dei monasteri era la comunità di Pietre Gemelle, At the foot of these pastures, property of the monasteries, the community of Pietre Gemelle was founded, an outpost inhabited every year since the winters of 1216-1217. It was probably built on the plain below the Vogna and maybe abandoned in the XIII century due to the frequent verflowing of the torrent’s banks. Leaving the church and the cemetery, the inhabitants moved “super ripam petris zumellarum” where Riva Valdobbia is situated today.
For three more centuries,the name Pietre Gemelle marked the inhabited areas where they went, combining new outposts of Walser colonization. The people of Pè, ancient monastic property  gave life to small self-sufficient villages, among which Pè d’Alagna became the centre of the community settled to the north of Riva which split from Pietre Gemelle in 1475, giving life to the community of Alagna.