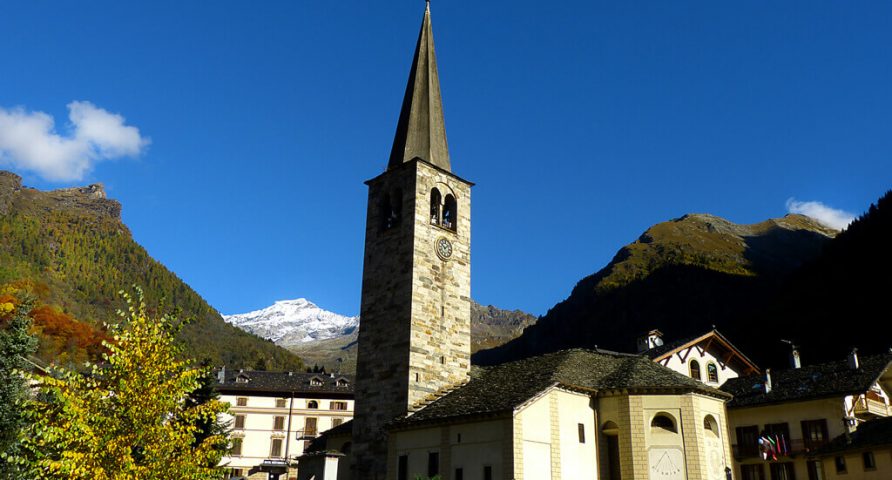 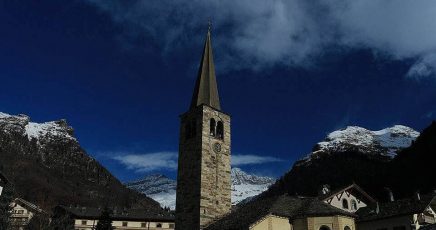 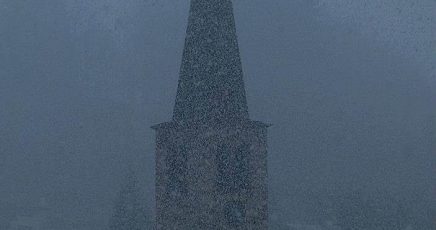 With children: yes
Where to eat: Caffè del Centro
Route number: no
By bike: no

A virtual tour to the treasures of the church of Alagna

The Parish Church in Alagna, dedicated to San Giovanni Battista (St John the Baptist), was built on an antique oratory whose traces have been lost and became the parish in 1475 after the separation of Riva from Valdobbia. The ever increasing number of families present in the territory of Alagna, the community taking root and the German language that prevented the parishioners from communicating with the parish members created the necessity for the creation of a new parish. The community of Alagna therefore asked for a parishioner who could speak titztchu underlying the importance that confessions could not be done with the help of a translator!
A bigger church was built between 1505 and 1511 in late Gothic style and then redecorated on the inside in Baroque style and restyled again between 1672 and 1690 in its actual form.
The elegant portico that protects the 19th century frescoes on the facade is the work of the brothers Avondo of Balmuccia and it represents the birth and ascension of St John, while the main entrance is decorated with a beautiful Annunciation.
The inside guards considerable treasures of sacred art, fruit of the creativity of local artists. Entering the church, your gaze is captured by the monumental pyramidal wooden alter made by Giovanni Maria Guala Molina of Mollia in the last decade of the 17th century. The tiles of the alter-steps narrate episodes of the life of St John the Baptist. To the right of the alter is a group of sculptures dedicated to San Rocco and St Sebastian and is the work of the Alagnese sculptor, Giovanni d’Enrico, brother of the famous Tanzio from Varallo. Next to it is the 16th century portable altar, an evocative example of the religious premises as is the big wooden 16th century cross.
To the left of the biggest altar, the one dedicated to the Madonna del Rosario,you can admire the delicate, refined engraving in the tiles representing the 15 Mysteries of the Rosary as well as the beautiful statue of the Virgin with typical 17th century voluminous drapery. The baptistery is remarkable with its lower part made of soapstone and dated 1630. The pulpit is also made of soapstone.
The cemetery is found next to the church and the ancient tombstones are placed on its surrounding walls. On the tombstones, the family names “huszeiche”(in the local language) are still visible, where once upon a time all the details of a family were engraved. In recent times it became a tradition to create tombstones using some architectural detail of the Walser homes. Inspiration is taken from the tombstone of the engineer Daverio, the enlightened benefactor of the community of Alagna who dedicated his life to the study and restoration of the Walser homes. Slowly this spontaneous phenomena is transforming the look of the cemetery and integrating it in a renewed feeling for the research of diversity in recovering the original aspect.