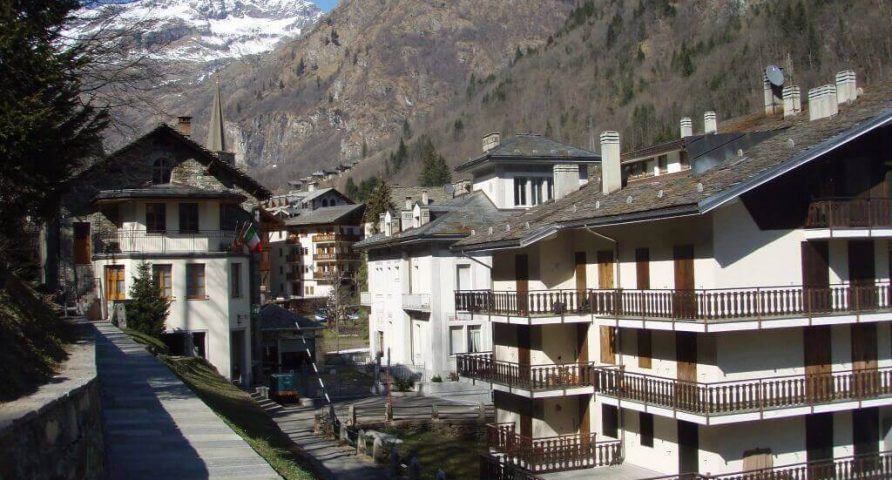 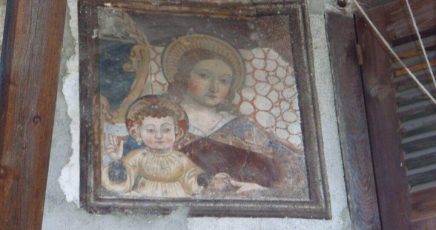 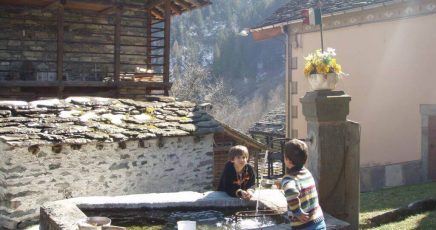 With children: yes
Where to eat:>pubs and restaurants of the centre
Route number: no
By bike: yes

A walk through the centre of Alagna, paying attention to the cornes that go unnoticed to  most

From the Church to Regina Margherita square passing trough the old path of the centre; visit of Pedelegno, Reale, Giacomolo e Resiga (45 min) first and on the way back Reale superiore crossing the large meadows of the area. (45 min)

The hamlets in the town centre are the second Walser settlement after that of the hamlets Pedemonte and Ronco. The members of some of the Pedemonte families founded this hamlet on the property belonging to the monastery of San Nazaro. It originated at the foot of Alpe Alagna, Lania or Olen and thus became Pè de Alagna, Pè de Lania o Pè d’Olen (Pedelegno). In one of the first documents its stated that Pietro Enrigone sold his property to Pedemonte for 80 Imperial Lire and settled in Pedelegno with his mother, in the year 1328. Throughout the XV century the colonies gave life to other settlements like Pè d’Otro (today Resiga) and Riale.

The route reaches 2 important stages of the ecomuseum of the territory and Walser culture, a project that tells the story of the Walser civilization focusing on work, homes, religion, games and allows you to get to know their habits, ancient crafts, curiosities about their daily life and the work of the people who used to live in the ancient hamlets in Alagna. It proposes an experiment where the visitor who takes a walk between the rural settlements, becomes the conscious protagonist.The ancient rivulet route is the original main road of Alagna from the previous century, and runs through the heart of the hamlets in the centre of the town. A diversion of the torrent Olen at times runs next to the route, which in the past, used to fill the fountains, public wash houses, drinking troughs and watermills in the town. A paved walkway starts from the portico of the Parish Church, near Caffè del Centro and after a few meters the rivulet, today without water, is clearly visible. The open part stops against the mountain hut Gnifetti, which was a mill in the past, and continues its way under the town hall in the direction of the hamlet Pedelegno . The first part flows into Belvedere Square in front of Casa Smitt, an elegant 19th century building built for the purpose of hosting elite tourists who characterized the revival of Alagna together with the budding interest in alpinism on Mont Rosa. The remains of the Belvedere’s cable car, the very first ski lift in Alagna can be seen here. It was removed in 1974 after a terrible accident that caused the death of 4 people. The entrance to the hamlet Pedelegno is on the opposite side of the square, which by now has fused with the modern buildings in the centre of Alagna. It reveals all its poetry in the intricate way the roofs were built following each other and the houses arranged close to the heart of the village. The new square with the Necer fountain, ariose architecture by Michele Necer a famous marble artist from Alagna who emigrated to Bern, is situated on the place where the rivulet used to fill up a public wash house. The road turns in the direction of the hamlet Reale and runs along the side of villas built at the start of the 20th century. Near the Indren Hus stone building is the oratory of the Visitazione built higher than the road; the Chapel dedicated to Santa Maria delle Grazie and a big stone cross, ex voto of a Walser woman who escaped the fury of an avalanche. Here the antique route leads into the more modern Centro street and continues until a narrow hairpin bend, called ‘curva del Perello’. It is so-called because of the historical shop that belonged to the Perello family facing the road and which for decades has been the main emporium of the Alagnese community.

The house where Teologo Farinetti lived in his later years is also situated here. He is the indisputable protagonist of 19th century Alagnese culture and the companion of the parish priest Gnifetti on his first ascent up Mont Rosa. Back on the ancient route in the hamlet Giacomolo, is the house where don Giovanni Gnifetti was born. He was born in 1801 and was the parish priest of Alagna for 38 years. In 1842 he conquested the summit Signal, whence the name Punta Gnifetti, where Capanna Margherita is situated today. The latter is the observatory dedicated to the Queen Margherita of Savoy. A little further is the house of D’Henricis, the family to whom the brothers Melchiorre, Giovanni and Antonio (known as Tanzio from Varallo) belonged to. They are the indisputable protagonists of Valsesian Baroque. Tanzio was a far-reaching national artist, known as the Caravaggio of the Api, whose works of art are displayed in the most important Italian art galleries. Next to the house, the small chapel dedicated to San Defendente can be visited. On the inside you can still see a wooden ancone with the names of the purchasers: Eva and Giovanni D’Enricis. The hamlet road leads onto the Principale road (Main road) once again and ends at the bridge of Otro, the perfect border between the communes of Alagna and Riva Valdobbia. Before the bridge, the Walser road starts and not far up ahead, are the first houses of the hamlet Resiga. It is so called because of the presence of a water sawmill that leans against a spacious, level area. This area was chosen for the abundant water supply from the torrent Otro and for its position ( it is the lowest lying hamlet in Alagna), which facilitated the transportation to the area where the logs were cut. The sawmill, an ecomuseum stop, is still in working order today. It moved by a paddled hydraulic wheel called “veneziana”, fed by water which was led into a feeding channel. Leaving the hamlet, in the middle of the meadow you can see a massive rock called “ der Pulferstein” that broke off the mountain in the 17th century and destroyed the hamlet, Pè d’Otro. A century ago, a room used to keep mining gun powder in, was carved out in the centre of the rock. Today it is used as a rock gym by the guide Corps of Alagna.

Continuing along the Walser route, you will reach the hamlet Reale. The route leads to the oratory of San Pantaleone and continues until the small hamlet square with a monolithic fountain, surrounded by beautiful Walser homes. On one of these houses an evocative 16th century Madonna with child can be seen. The paved trail after the small bridge on rio Fuar del Reale leads directly to the hamlet Pedelegno in the vicinity of Unione Alagnese, an ecomuseum stop. This splendid stone building is the theatre and was inaugurated on the 30th December 1900. Its start of the century charm is still intact and it is an active centre where the Alagnese residents regularly come together. On the inside the allegory paintings of Ars and Labor, works of the Valsesian painter Camillo Verno (Campertogno 1870-1942) and the scenography of Ercole Sormani can be seen. Back on via Centro (Centro road), continue in the direction of the church, Casa Stainer can be seen on your right, near the post office. It is a beautiful mountain hut and perfectly preserved. On the opposite side is the house of the presbyterian Giovanni Bruno. Today it is partly reconstructed and displays two coat of arms ( one made of soapstone and the other, white marble) on the front, signs of its history and past splendour.