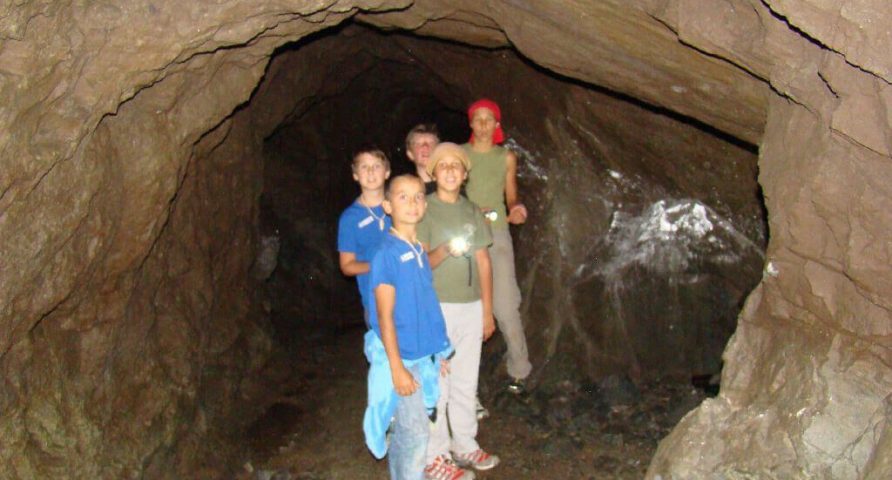 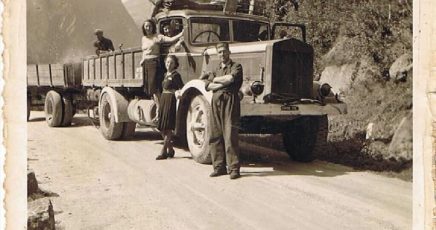 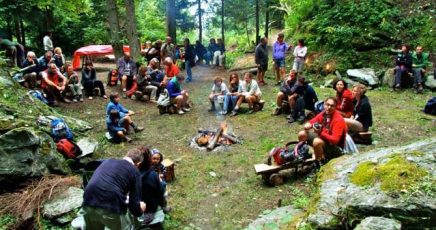 Easy hike, with minimum altitude and well-marked trail but with steps and some rather steep. Great for walkers with a minimum of training.

After about ¾ of an hour’s walk along the trail (marked No.203) to Otro it is easy to recognize the path among the vegetation that leads to the mines in 5 minutes. You can see some remains of buildings where the ore was collected and the start of the cable car used to transport the ore to Alagna. Not far from the entrance of the mine, about 10 meters into the mountain you can still see the wooden scaffolding that supported the vault of the tunnel.

Entering the mine is not recommended, but you can observe the structures and service buildings used during the extraction activities, the terraces, stairways and trails that the miners used. Following the path you can see, in particular, two now demolished buildings that were used as storage for equipment and machinery, and the semicircular arrival of the cable car where the grafts of the hoppers can still be seen.
We recommend a visit to the site due to its fascinating environment and the particularity of the places, but taking precautions in light of the fact that the buildings are in a derelict state and crumbling and the trail, even though marked and checked, contains difficult passages and is to be considered for experienced hikers. For guided tours we advise you to look through the Alpine guides and hiking trials in Alagna.

The Manganese mines of Alagna: Town life during the Second World War.
Manganese is a metal used by man since prehistoric times: manganese dioxidepigments have been found in cave paintings of 17,000 years ago, Egyptians and Romans used it to manufacture glass, the Spartans fused it with the metal from their weapons to ensure its legendary toughness. Today it is essential for the production of stainless steel and aluminium alloys. Between the two world wars, on orders from the autarkic Mussolini government, the research of metals and manganese in particular which was used by the aviation industry, intensified throughout the Italian territory.

In this historical context, the Piedmont Ferriere, founded in 1907 and bought by the Fiat group in 1917, dedicated to the production of special steel, weapons and ammunition as well as wheels, tire-rims and pieces of bodywork, obtained permission to exploit the Manganese ore deposits at Belvedere, near Otro in November 28, 1938. At the same time they extended their interest to two neighbouring concessions: Punta Strailing in upper Val D ‘Otro and the area under the Red horn which they obtained in 1940. Until then, the concession for the exploitation of the Belvedere deposit was given to A.M.M.I., a company which had many mines in Valsesia including Doccio, Balmuccia, Sella Bassa, Scopello and Becco d’Ovaga in Varallo. The A.M.M.I. gradually shifted its interest from Valsesia to Val d’Ossola, leaving the deposit in Val d’Otro virtually unused. FIAT the successor was dedicated to new research. They greeted the “discovery” of the mine-Alagna Otro with enthusiasm and satisfaction because it meant important future investments. Wally Moretti employed as a Secretary at the Mines recalls having assisted with the mineral analysis performed by engineers of Fiat “done in a craftsman manner with manual grinding “recalls their satisfaction with the quality of the ore extracted and its pink colour, which had no traces of nickel or iron present as in other mines in Valsesia. After successfully passing the stages of site evaluation, FIAT quickly started building a cable car to transport the materials to Fabbriche, a locality about a hundred meters south of the bridge over the river Otro, which was raised above the level of the road, to facilitate loading. They also built warehouses to store implements and materials, another to house the mill and the hoppers and a shelter for explosives near the entrance of some deposits. A significant number of workers were hired and a house in the village was used as offices and a small apartment for staff. The hotel Stainer provided a canteen service for employees and managers, while the miners’ cook was MrsThiebat from Valle d’Aosta. Wally says: “having work experience at AMMI, I had to quit, because my father was unwilling to accept the transfer to Val d’Ossola proposed to me. I could therefore personally appreciate the efforts made by Fiat in the initiative.” Progressively, the manganese mine in the village gained the deserved importance and, in common parlance was called “Minera”, almost wanting to emphasize its uniqueness. Trucks of imposing dimensions were used for the transfer of the minerals providing transport up to Varallo where the material was loaded onto wagons destined for Turin “Corso Mortara, 7,” says Wally “I sent so many letters that to the management of Fiat and despite the fact that nearly 70 years have passed, I can never forget that address.

The staff of the mine grew rapidly: from 17 in 1940 to 66 in 1941 and declined just as quickly after the war. In 1946 there were 64, 31 in 1947 and 1948 there were 26. It still continued running until the summer of 1949 with eight men. In October, by the time the permit expired, the site had already been abandoned. “Those were the years when on the entire road that lead to Val d’Otro not a twig could be found on the trails. The woods were clean because workers returning home gathered wood on their way. “It seemed asif the trail to Otro had been cleaned by the cleansing department says “Franco Fanetti, who used to work at the mine during the war years. His father Joseph, who was in the Police, was guardian of the explosives used to overnight there, because in those difficult years it was necessary to protect them from thieves. At the mine there was a fatal accident that claimed the life of Emilio Berta from Balmuccia. Alberto Gualdi born in 1919 says, an unexploded charge “gravia”, as it was called in jargon, exploded while the miners were trying to defuse it. “Not everyone knew how to mount charges, you had to have experience and many went to work in the mines to avoid going to war and so there was no time to train them. When the first charge exploded the acetylene lamps were extinguished by the blast and you remained in total darkness, perhaps 100 m underground, and you had to remain calm and count that all the charges had exploded. But those who were not prepared, got scared, they were afraid. A boy, who was sent with me, ran away screaming in the tunnel and I did not know how to catch him again. I liked to do that job. There was silence after the blast and it was hot in the tunnels and you could even get some sleep ‘.

The mines and the miners were the beating heart of Alagna during the war years, the men who did not go to the front worked there, working created a semblance of normal life and the proceeds of the mine helped many families from starving. It was at the mine shop where the end of the war was celebrated with a grand ball which everyone attended. Apparently it was a big party with a demijohn of wine placed in the centre of the room where everyone could drink from, and there was accordion music and dancing and probably a great fight too. It was a magnificent celebration that has remained alive in the hearts of those who are still alive today to remember.